A walk up a mountain

To date this blog has focused on policy and politics, but there is no reason to limit it to such topics. This week, I thought I'd write about my walk up Britain's highest mountain, Ben Nevis.

The idea to tackle Ben Nevis first occurred to me when it looked possible I'd be travelling to Glasgow for a conference. The conference was postponed due to the Covid pandemic, but with foreign travel tricky at the moment, I thought I'd opt for a staycation in Fort William in the hope of a good day to climb Ben Nevis.

What I hadn't really done prior to booking was much research other than to see how close the path was to the hotel. Following the booking, I read considerably more and watched a few YouTube videos made by others who'd done the walk. These videos painted a confusing picture. One would show a relatively smooth ascent with plenty of people shown walking along the path. The next was of a lady who started to panic as the mist rolled in. The third showed a child happily trooping up. The fourth was a detailed account of what was needed in the first aid kit.

I ordered some hiking leg-wear with the description 'Action Trousers', a map and a rucksack and stocked up on energy bars.

I arrived in Fort William on a Monday afternoon and promptly checked the location of the start of the path up the mountain. My preference was to do the ascent on Tuesday, but a look at the mountain weather forecast suggested that there was likely to be heavy rain and thunder in the early afternoon. By that stage I would have hoped to be well on my way back but with the Wednesday forecast to be clearer, I decided the sensible thing to do was to reschedule the climb.

I wanted to make the most of cool temperatures and a relatively quiet mountain. While estimates vary it appears around 125,000 people climb Ben Nevis each year and having visited the start of the path in advance it was clear that there was a car park full and more on or around the mountain. My ascent started at 5:45 am. As I started, I could see four people ahead of me, two of which I overtook - the only time I overtook anyone during the entire journey up the mountain. 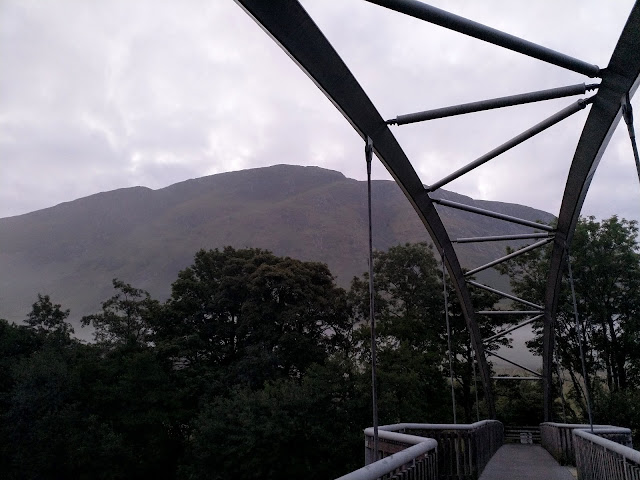 The early section of the path is neither particularly steep or difficult and it was easy to get up a decent pace. Even so there were a few surprising moments when it was necessary to clamber over smooth rocks which seemed out of place along an otherwise well trodden soil and stone path.

My legs started to feel the enormity of the task ahead when the path took on a far steeper gradient. The route itself was well made with stones effectively creating a stairway up the slope, however it was the physical effort of stepping up time and time again through this long stretch which slowed my pace considerably. Just as the temptation to take a break kicked in, so sadly did the midges. The vicious little blighters seemed only to attack at a certain height, it just happened that was the point when I was finding the climb tough on my legs. I had insect repellent and when sprayed that did help considerably, but I was still bitten repeatedly when it was not freshly applied. 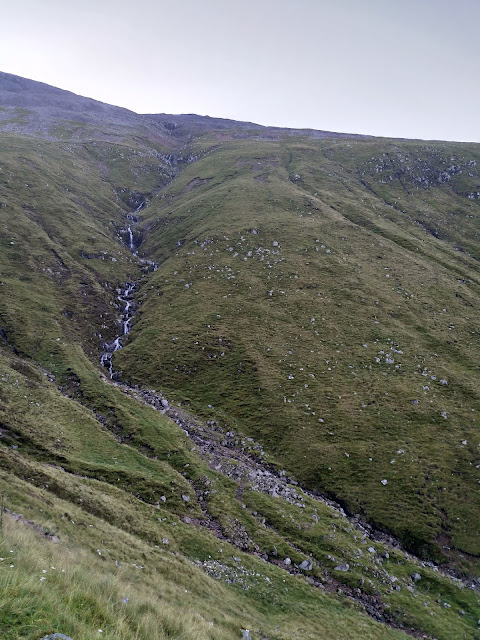 A moment of calm

There was real relief at the conclusion of the seemingly relentless stone steps. The path zig-zaged but the walk was easier on the legs. Soon the land in front plateaued revealing a loch, while one could also see the neighbouring peaks still shrouded in morning mist. 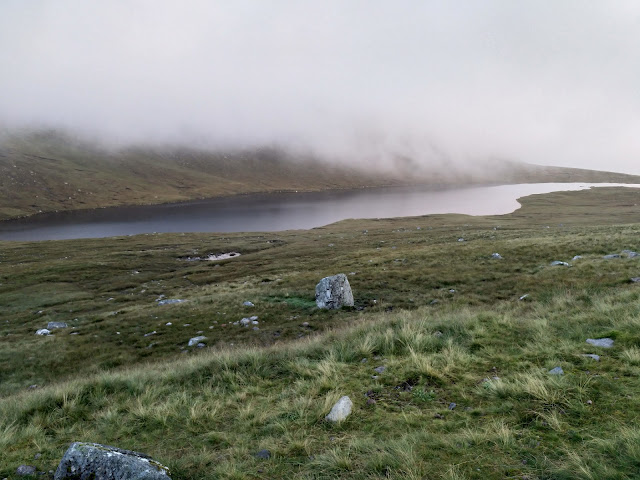 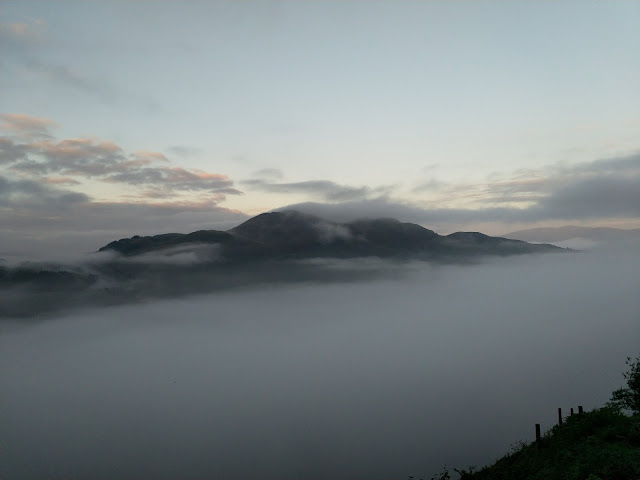 The smooth path at this stage looped around to begin the ascent of the tallest part of the mountain, albeit the summit remained someway off. The most notable moment of this section is a walk across a stream with small waterfalls to either side of you. 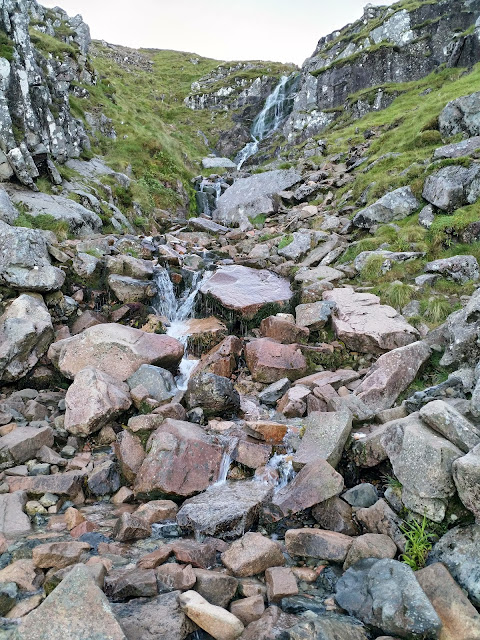 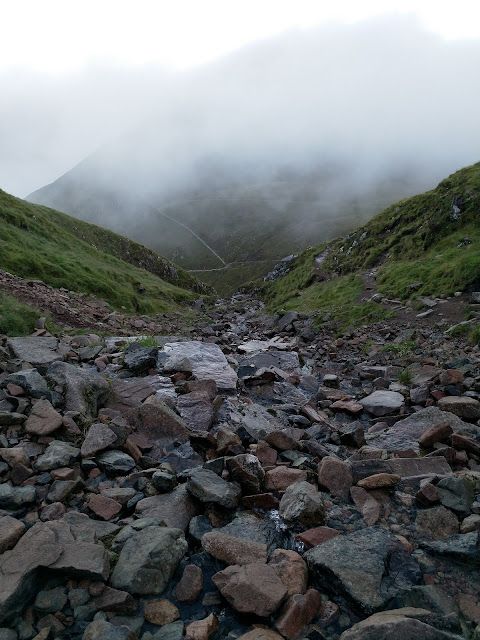 One step forward, half a step back

For much of the route up the path zig zags, but the most marked section taking on this format was to come next. If the stone steps were a physical challenge, and they were, this component of the path included a mental challenge too. The path was made of shale and stone and with every step forward my foot slipped back a little making it incredibly slow and frustrating progress. A few times, I stood to one side to allow those who were moving quicker than me to overtake. This included the first time that a dog had gone by on the journey. Dogs seemed to find it annoyingly straightforward to climb!

There were however increasingly impressive views of both near and distant peaks rising above the cloud line. 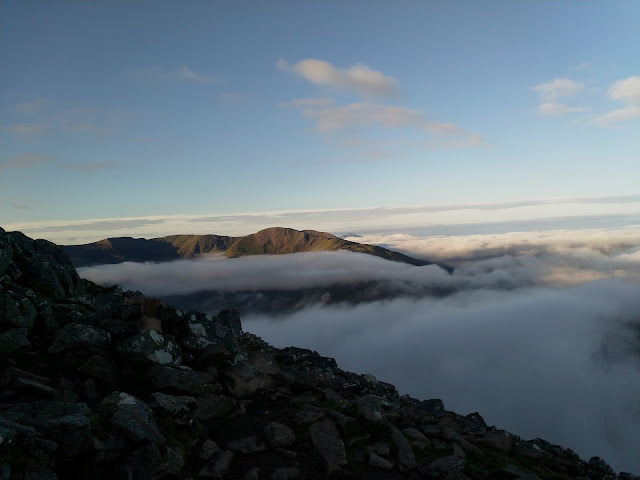 As one gets higher you start to see the cairns to help you navigate as it becomes less clear as to where the path lies across a landscape of rocks and stones. Overall though, reaching the cairns was a moment of encouragement that I was making decent progress.

I reached the summit about 3 hours and 30 minutes after I started, which judging by some of the guidance was actually pretty decent even if I felt the walk had taken a lot out of me. Towards the peak of the mountain I saw some snow in one of a ravines. While not uncommon in the Scottish Highlands, it is still the first time I've walked by snow in August. 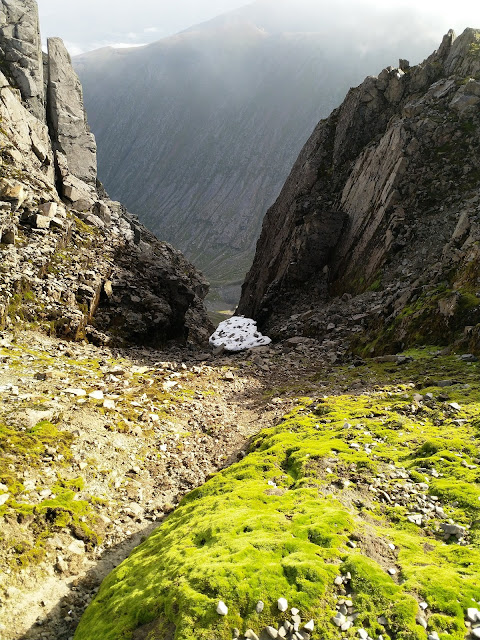 The summit of Ben Nevis was under cloud cover as is often the case. I was unconcerned by this. I knew that one needed to be very lucky to get a clear day and good views from the top and I'd seen plenty of spectacular landscapes on my way up. I was just pleased to be at the summit. 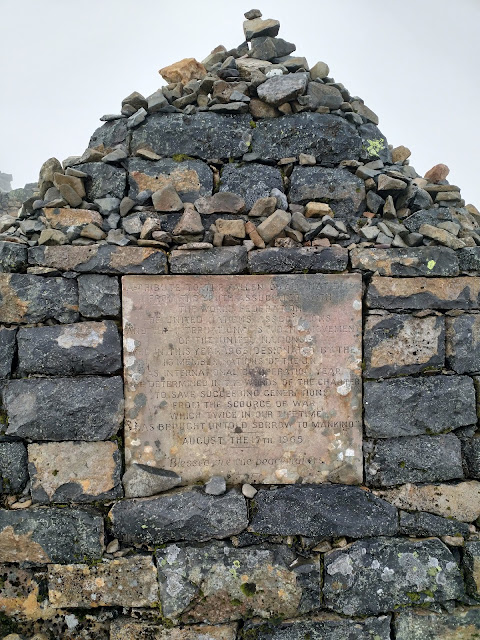 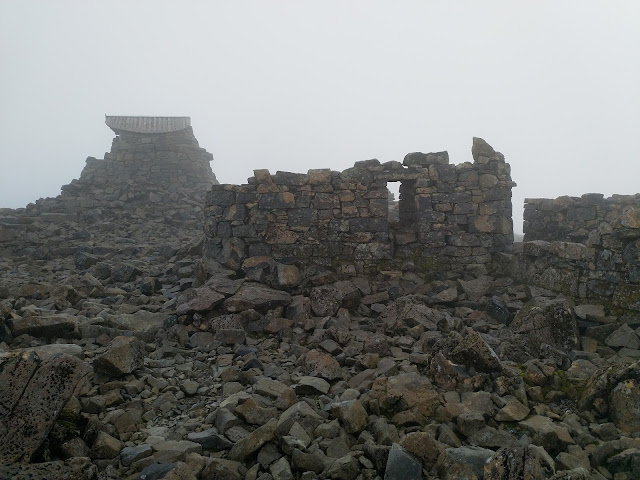 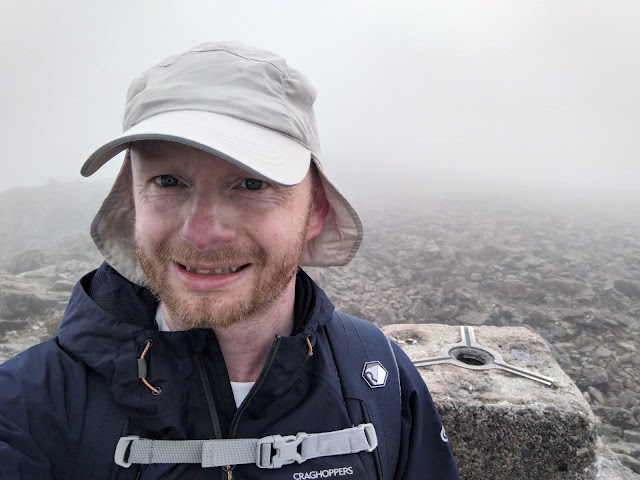 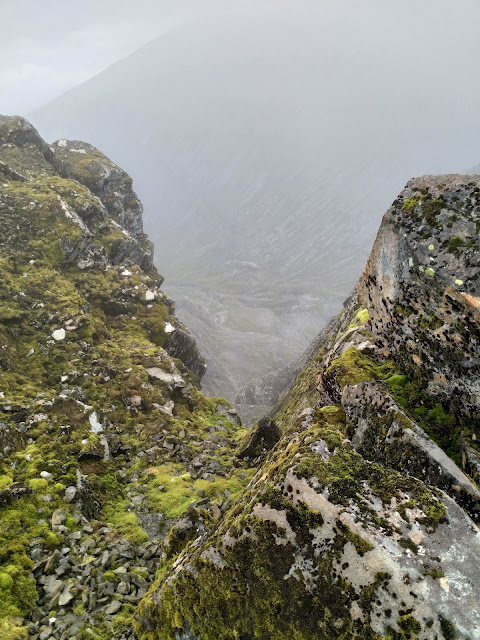 I felt a real sense of achievement, even more so because while I thought I was reasonably well prepared I had still found it a very challenging hike.

Another thought entered my mind. In early 2018, I briefly met Patrick Boothroyd at Cardiff University. As far as I recall we only had one conversation and it was no more than a friendly chat, though Patrick came across as clever and engaging. Patrick was an experienced mountaineer who tragically died in December 2018 while climbing the Tower Gully route up Ben Nevis. While I stood on top of the mountain, I could clearly remember chatting to and sharing a joke with Patrick as we waited for a Cardiff University class to start.

As I began the journey back, I reached into my rucksack for an energy bar, rummaged around for a while but failed to locate them. What I found instead was my little packet of complimentary hotel biscuits. So while others were eating energy bars and bananas, I was opening my double pack of ginger nuts. Very nice they were too.

During the ascent I'd seen only a few people, but as I progressed back down the mountain I saw many more. I struck me that there seemed to be quite an array of preparedness. I wondered what supplies those without rucksacks had and in my own mind questioned the wisdom of some of the clothing choices I saw. All that said, I was hardly an expert. I hope all those I saw heading up as I was coming back down made it to the summit or at least had a good hike up Britain's tallest mountain.

One clothing tip I'd been given in no uncertain terms was not to wear jeans. This was good advice, but it amused me to see a pair of jeans, still with belt attached discarded about a third of the way up the mountain. I imagine the owner planned to pick them back up on the way down but had concluded they were not the tool for the job of ascending Ben Nevis.

Indeed, leaving items at the side of the path to lighten the load appeared to have led to someone else leaving bottles of beer to one side, I suspect they might be less likely to still be there on his or her return journey.

It took me around 2 hours and 30 minutes to get back to the start of the path. Of course, it was not as challenging as walking up the mountain but it was still tough on my feet and knees and a few of the boulders one had to climb over were easier on the way up than the way down. 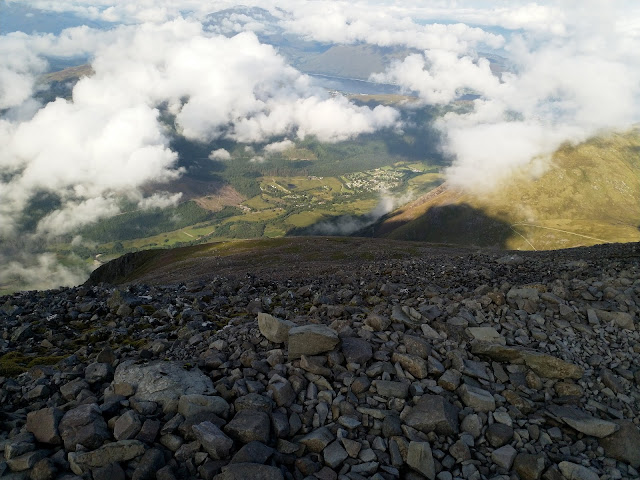 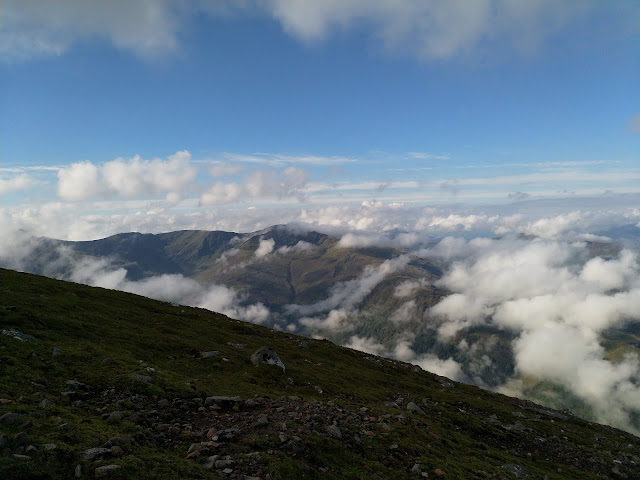 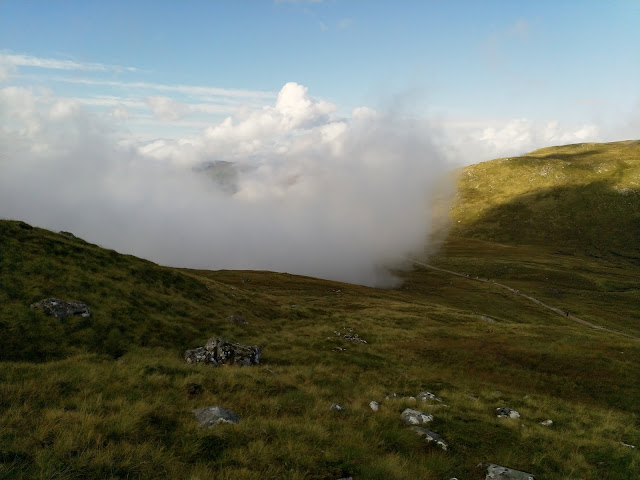 This year has not gone to plan in many ways. It is nice to get an achievement in the books, so I can look back on 2020 with some pride. I mentioned at the start of this blog post that around 125,000 people a year walk up Ben Nevis. This can only ever be an estimate as there is no system of counting who starts the journey, let alone who makes it to the top. Let us presume though that it is an accurate figure. I'm pleased to have been one of the 125,000 this year, and I'm very happy to let somebody else do it instead next year!