Segmentation in the Senedd Election campaigns

One of the silliest questions in politics, for there are a few, is "who won the debate?". The winner of the debate is the person who encouraged the maximum amount of their plausible supporters to go and vote for them. Thus, it is actually possible that everyone 'won the debate', and likely that there will very rarely only be one clear winner.

The same is true at a local level. In 2015, I engaged very little in direct disagreement with Paul Flynn. Our relative positions on the political spectrum were markedly different and perhaps our styles and approaches to how we engaged in politics even more so. I knew there was a very small number of people who would be hovering over whether to vote Conservative or Labour based on the two local candidates.

The point I am making is that politicians and parties do not seek to win everyone's votes. They make an assessment of where there is a potential to achieve an increase in their share of the vote and they target their message and resources to those people. I raise this now, because it has perhaps never been so pronounced in the Senedd election as it is right now. Let us consider the approach and challenges the parties face.

Plaid Cymru enter this election far more bullish about independence than has previously been the case. For a period it was played down as a long-term ambition rather than an impending possibility. There seemed to be a concern it could scare away potential voters. Now, it is front and centre of their intentions with Adam Price seeking a referendum within a decade. There is momentum behind the independence movement but it is still a minority interest. The proponents are dispersed very unevenly across Wales' forty constituencies. Nonetheless, a conscious decision has been taken by the Party that both support for and visceral reaction against the nationalist narrative are at a level in which Plaid Cymru can make a net gain in Senedd seats.

The Welsh Conservatives' approach is the starkest and in some ways both a reaction to and a useful counternarrative for Plaid Cymru's more vocal nationalism. The Conservatives have clearly had one major focus in the run up to the Senedd election, namely turning out the voters who will back them in UK General Elections but tend not to vote in Senedd elections. It is a staunchly unionist campaign. The raw numbers do work for this approach, typically more people vote Conservative at a UK election than vote Labour at a Welsh one. That said, this has been an area they have sought to exploit previously without making the breakthrough they had hoped for. Personally, I would prefer the lead opposition party to be presenting itself as a government-in-waiting rather than chasing core votes, but it is hard to dismiss the mathematical logic of their approach.

For a period, the rise of a hostility to the very existence of a Welsh Parliament posed a threat to the Conservatives and an opportunity for the Abolish the Assembly Party. Long latent opposition to the Senedd among Tory members has been harnessed by a new generation of  party activists. Yet with the plausibility of abolition marginally increased it created a problem for the Conservatives. Would Tory supporters lend their regional vote to the Abolish Party as they had to the Brexit Party in the 2019 European elections? This risk has diminished under the leadership of Andrew RT Davies who is about as plugged into the Tory membership as it is possible for a leader to be.

However, it presented some awkwardness around pro-devolution Conservative candidate selections. No sooner was Michael Enea, a hardworking local party activist, selected in Newport West than devosceptic Twitter Tories were challenging him with screenshots of tweets he had published indicating his support for further devolution.  The Party will need to temper this hardline approach if it is to attract candidates with a rounded political interest. Previous Welsh Conservative leader Paul Davies was keen to emphasise the broad church nature of the party. It is hard to conclude this is not under strain at the moment. 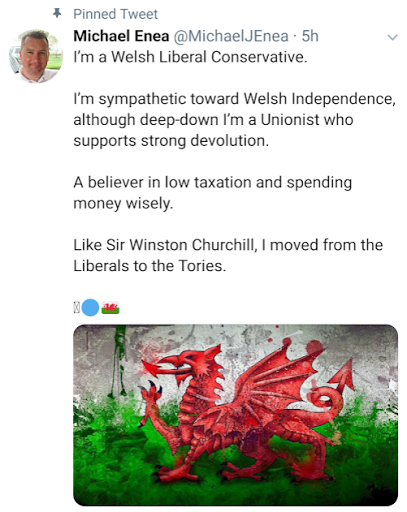 I wrote in January about the potential path I saw for the Lib Dems. I'll not repeat too much of that here. I was concerned that it was a party that battered from recent results had become a little insular in its perspective and that it was missing the opportunity to have a distinctive voice on environmental sustainability, the future of work and its related impact on the economy and technological advancement. I felt that the party was not lacking in ideas, but that the discourse to accompany them, at least which was spoken of confidently, felt hemmed in by reluctance to step out of the comfort zone. Yet, when I watched their party political broadcast this week I felt they were starting to find their voice again and understanding what makes them distinct from other parties. I'm still not sure they are quite ready to go after those moderate Conservative votes which could be up for grabs after the Tories uncharacteristically ideological turn. Picking a fight with Plaid over Welsh independence being ten times more costly than Brexit also helped mark them out from their one-time pro-European 'progressive alliance' partner.
Where then do Labour sit in this debate about segmentation? Actually, I think their biggest problem for many years has been unnecessary segmentation. They have proven to be the natural party of  government in Wales for the last 20 years, but so often I hear interviews in which their representative insists of referring to 'Labour values' or 'Labour achievements'. All parties do it to an extent but it comes as second nature to Labour and I think it creates an unnecessary division between Labour members and floating voters.  The Labour voter base has changed recently as demonstrated by marginal affluent urban seats becoming more secure but so-called 'red wall' constituencies falling to the Conservatives. Long-term this may require a radical re-thinking of how they segment their vote but for 2021 there will be enough support across social demographics to retain most of their Senedd seats.
I think there is a broader point about voter segmentation which will come into play in May. The parties of the centre and the left tend to be attracted to specific messaging for particular identity groups. While well-intentioned, I am uneasy about this approach as it is prone to lump people together based on just one characteristic while downplaying individual agency. The Conservatives segmentation is traditionally based almost exclusively on a voters' proclivity to vote Conservative. They are unconcerned with who you are, just how you are going to vote. I think this often leaves the Tories as the party who appear to be talking to the greatest number of voters and is a crucial factor in why they continue to poll well at a UK level despite a challenging year. I have no doubt the other parties want to talk to a wider audience but they are yet to find quite the same consistency of wavelength as those in the blue rosettes.
Posted by Nicolas at 12:02